Human-microbe travelling and risk profiling of refugees in AMR screening

Figure 1. Air traffic from space in 2015. Image by the European Space Agency (ESA).

The history of infectious diseases (IDs) can tell many stories of how microbes have been moving around the globe following their human carriers. For example, Europeans are often described as those who introduced smallpox, influenza and measles to the Americas (Crosby, 2003). Modern history provides examples of cross-border infectious disease transmission through the globalised network of train and plane travel routes, such examples can be SARS in 2002-2004, MERS in 2012, as well as SARS-CoV-2 since 2019, in which air-travellers have been often presented as the main global spreaders of infections (Wald, 2007; Kraut, 1995). Looking at the air traffic in 2015 in Figure 1, it becomes clear how interconnected the modern world is as each of the lines indicates the route between two different parts of the world allowing the movements of people as well as their accompanying microbes. The frequency, speed and challenges related to control of these movements have always been at the focus of attention for public health and policy professionals aiming to secure national and international health interests, leading to various measures of border control, screening of arriving travellers, and quarantine (Kraut, 1995; Kenwick & Simmons, 2020).

In the last decade, antimicrobial resistance (AMR) has been described as a threat that should be understood in the context of international human mobility (Schwartz & Morris, 2018; Hassing et al, 2015). For instance, research from the Netherlands analysed how general travellers may acquire and disseminate AMR from their travel destinations to the Netherlands (Arcilla et al., 2017; van Hattem et al., 2016). These studies showed how travelling to certain regions is a risk for acquiring and carrying AMR for up to 12 months after travellers’ return from the trip (see Figure 2). Another research conducted by Finnish scholars analysed AMR dissemination by focusing on patients hospitalised abroad and consequently treated in Finland (Khawaja et al., 2017). This study highlighted that such factors as

a travel destination, as well as interhospital transfer, duration of travel and antibiotic use, are independent risk factors for AMR acquisition (See Figure 3).

Figure 2. The Figure is from Arcilla et al. (2017) and it shows percentages of Dutch travellers that acquired β-lactamase-producing Enterobacteriaceae per subregion before returning to the Netherlands. 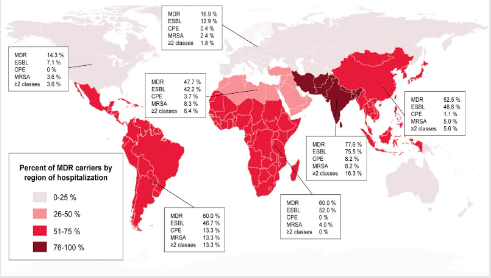 Figure 3 The Figure is from Khawaja et al (2017) and it illustrates the prevalence of multidrug-resistant bacteria carriage in returning patients in Finland according to the geographic region of their prior hospitalization.

What to do in such a situation? Should all travellers be screened?

Screening every traveller for potential infection or AMR is an unfeasible and ineffective measure for infectious disease control (IDC) as it would cost a lot of money and would require special infrastructures. Therefore, screening for AMR is often focused on specific risk groups, such as patients who have been transferred from a hospital abroad, or people who have been previously diagnosed with a resistant infection. However, when considering the classifications of risk groups for specific health conditions, it is important to reflect upon the history of IDs generally, which demonstrated how such classifications have been often intertwined with political, economic and social agendas, stereotypes and biases. Examples can be found in the field of HIV/AIDS where “key populations” such as LGBTI, people using drugs or sex workers have been portrayed as the main risk group for acquiring the infection, or the Tuberculosis (TB) screening in high-income countries where measures have been focused on migrant communities (Wald, 2007; Bashford, 2010).

The modern epidemiological focus on foreigners for IDC can be traced to the cholera epidemic in the US in 1832, during which the Irish population was blamed for causing the infection, and the US bubonic plague epidemic in 1900 when the blame was laid on the Chinese population (Kraut, 1995). To reflect upon the recurring role of ‘foreigners’ in epidemiological thinking of IDs, Wald (2007) suggested the concept of an ‘archetypical stranger’ – a ‘foreigner’ who is seen to carry and spread infection. Such archetypical strangers, Wald argues, have been central figures in epidemiological thinking and outbreak narratives presenting starting points of infection spread. For example, she explains how the global spread of SARS in 2002 was associated with a Singapore flight attendant. Identifying and controlling these ‘strangers’ have become the central aim of IDC and led to the creation of surveillance and screening programs that try to identify potential infectious danger that is always presented as coming from outside. Such focus has often led to the creation of discriminatory discourses and policies that present diverse population groups as potential carriers of infections. These ideas have been used as justifications to impose disease screening procedures, and sometimes limit people’s access to certain territories (e.g., restricting movements of refugees and asylum seekers during the SARS-CoV-2 pandemic) (Lin & Yeoh, 2021; Macklin, 2020).

Currently, the screening for certain resistant bacteria, such as Methicillin-resistant Staphylococcus aureus (MRSA), is mostly done upon admission to a hospital and such screening is targeting specific groups that are considered to be at high risk. For instance, in the Netherlands, such groups include farmers and people living on farms, patients who have been transferred from a foreign hospital, and, since 2017, people living in refugee facilities. Of these groups, the inclusion of refugees has been the subject of considerable debate in Europe. Public health professionals argue that refugees from areas with a high prevalence of MRSA should be seen as particularly risky (Heudorf et al., 2016; Reinheimer et al., 2016). For example, since 2015, the Robert Koch Institute has recommended screening of all refugees for multidrug-resistant organisms on hospital admission in Germany. Conversely, in Finland, patients admitted to hospitals, who have been hospitalised abroad in the past year, are screened. It remains unclear why in some countries refugees are singled out from other travellers and considered to be particularly risky for AMR compared to other categories of travellers. The questions have been raised and debated on the pages of the European journal Eurosurveillance, where scholars were concerned with the stigmatisation of refugees through their portrayal as risk groups for AMR (Walter et al, 2016; Reinheimer et al, 2016)

To understand the rationale as well as the potential consequences of AMR screening of refugees in the Netherlands, in 2016 the research team from Maastricht University conducted a study based on in-depth interviews with public health doctors, public health nurses, microbiologists, as well as refugees arriving in the Netherlands (Kamenshchikova et al., 2018). Interviews with diverse public health professionals in the field of AMR as well as with refugees themselves have uncovered a net of complex controversies that surround the decision to screen refugees for AMR in the Netherlands. Based on data from microbiological studies, some professionals interviewed argued that refugees can be seen as particularly risky for AMR as they often travel in crowded conditions with limited access to health services. However, this was not a homogenous opinion. Other public health professionals, in particular public health nurses, argued against the screening of refugees as they highlighted that such a decision may cause unnecessary stigmatisation of a group, which is already socially vulnerable. At the same time, during the interviews with refugees, some of the participants raised the question of stigmatisation and questioned racist undertones of targeting refugees: ‘if AMR is such an important problem, why are you only screening refugees? Why not offer this screening to every traveller?’

Based on these findings, several questions can be brought forward to be further discussed. Can refugees be seen as at particular risk of acquiring AMR due to the circumstances of their travelling? Does this justify thinking of refugees as a homogeneous group that is at risk of AMR, or should there be distinctions between different groups of refugees depending on their departure country? What are the lessons that were learned from the history of IDs generally on selective screening? What other potential reasons exist for why refugees are singled out as a specific group of travellers? In most European and North American countries, in the last decades, refugees have been the subject of health screening, for instance for TB. Therefore, the practice of separating refugees from other travelling groups has been embedded in public health thinking, policy regulations and physical infrastructures of many countries – which means that refugees have already been institutionalised in public health policy and practice, for instance, by being located and processed through specifically designated refugee centres. Such institutionalisation of refugees has been debated and criticised by different scholars pointing out the discriminatory and racist undertones of these practices (Kraut, 1995; Wald, 2007). What it means to add an additional screening requirement to the population that has already been a subject of public health scrutiny is a crucial point for understanding. It also illustrates the way in which biomedical, social, and political processes can intertwine and co-shape each other.

The decision to screen or not to screen a specific population group is a complex process that should not be based on biomedical risk assessments only. Categorising and separating refugees as a particularly risky category of traveller may evoke stigmatising discourses of ‘foreign others’ (Brown & Nettleton, 2017; Wald, 2007). Therefore, the question of AMR screening of specific population groups such as refugees is not only a public health question, but it is also a social as well as an ethical question. Should AMR risk categories be defined and narrowed down to be manageable for public health and how? Should risk categories include those who have been at high-risk areas or those, who have been hospitalised abroad? What arguments can be put forward for narrowing focus on specific travelling groups?

There are four core elements that you may draw students attention to:

The research project described in this case was conducted by a research group from Maastricht University, including Alena Kamenshchikova, Petra F.G. Wolffs, Christian J.P.A. Hoebe, John Penders, and Klasien Horstman.

Assistant professor at the Health, Ethics, and Society department of Maastricht University

Director of the Social Study of Microbes research group, University of Helsinki

A note on language
Select language