How is Ukraine overcoming the measles outbreak?

Roman Rodyna, is the Head of the epidemiological surveillance department of Public Health Center of the Ministry of Health of Ukraine, a partner in the Sonar-Global project and an Epidemiologist, hygienist, public health specialist, MD. We have interviewed him about the measles outbreak in Ukraine.

Why do you think that measles was such a problem in Ukraine, both last year and this year?

The measles situation in Ukraine has been getting worse due to the specificity and periodicity of this disease. Ukraine suffered measles outbreaks back in 2001, 2006, and in 2012. The following diagram shows the number of measles cases and MMR vaccination coverage in Ukraine from 1990 to 2018. 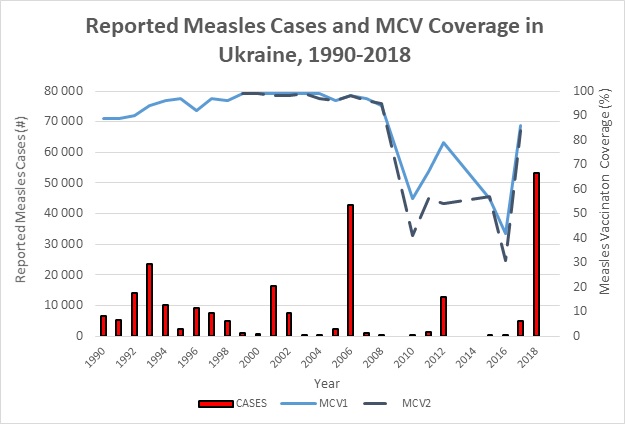 The diagram shows that the number of measles cases slightly declined after the introduction of the second injection of MMR (measles, mumps, and rubella) vaccine. But despite that, Ukraine had two measles outbreaks – in 2001 and 2006.

Additionally, measles vaccine coverage rates have decreased since 2008 because of anti-vaccination movements, which are widely covered by the media.  Vaccine coverage continued to decline in 2013-2015 for several reasons: the lack of vaccines, the challenges faced by Ukraine’s vaccine procurement system, and finally increases in the country’s non-immune (unvaccinated) population (2016). The last measles outbreak began at the end of 2016. More than 100 000 unvaccinated measles cases have been reported through May 2019. Unfortunately, 33 people died due to complications caused by this disease.

Taking into account the existing MMR vaccination, measles remains a challenging infectious disease for Ukraine.  The only way to overcome it is to conduct supplementary immunization among risk groups.

How did the Ukrainian Ministry of Health (MoH) respond to this outbreak?

Many measures were undertaken by the Ukrainian Ministry of Health to limit the measles outbreak. We can identify at least three types of response:

A catch-up vaccination campaign was launched by the Ministry of Health in the six most affected regions in 2018-2019.

Strong vaccination promotion activities were covered by the national media.

UNICEF and WHO organized and conducted a series of trainings/seminars with parents and healthcare workers on measles vaccination and on the importance of vaccination in general.

Ukraine now has a vaccine supply that can cover country needs for routine and supplementary vaccination.

How do you think that Ukrainian people perceive the measles vaccine?

The measles vaccine is now perceived positively. Surveys conducted by PHC showed that at least 80 parents have a positive attitude to vaccines. But some are afraid of secondary negative effects following vaccination.

There are about 8-10% of people who are “strongly anti-vaccine”. I believe that this is due to a lack of awareness and misinformation about vaccination, as well as the influence of some health workers who do not recommend vaccination.

Our efforts must target “anti-vaccine groups”.  I think that the community and social scientists could play a major role in changing the perception of anti-vaccinators.

What can the social sciences contribute to controlling measles in Ukraine and more generally in Europe?

In my view, the primary role of social scientists is in promoting vaccine to people who oppose vaccination. They know how to use understandable explanations, unlike health workers, who often use specific medical terminology which can be difficult for people to understand.

What do you think we can and should learn from recent measles outbreaks?

I think that we can learn that vaccination is the cheapest way to avoid diseases. It is so expensive to treat diseases and so very inexpensive to prevent them.

As the famous surgeon, Dr. Pirogov said in the 18th century, “The future will be for preventive medicine!”

And this future is right now and for us!